In our fifth year as regulator IPReg reached a milestone:

After more than two years of hard work by the professional team we became a Licensing Authority for Alternative Business Structures. This development ensures that all IP firms, regardless of their commercial structure, can be regulated by the same body. This will not only ensure consistency for those on the register, but also provide assurance to consumers that standards will not vary as a result of ownership changes. Without the support of both Institutes and the practical help of some senior players, we could not have achieved this. My thanks go to all those who gave so much time and effort.

On a different theme, there was a major meeting in the summer with the Lord Chancellor and his ministers. The purpose was to bring all the LSA regulators together and consider how the regulatory burden might be reduced. The issues surrounding a policy objective stated in such simple terms, present real difficulties. Regulatory failures in areas of banking and hospitals, provide just two examples of what can happen if the regulatory effort is not fit for purpose. The outcome of this meeting was a further look at what might be done (without primary legislation). 2015 will see the appointment of new members, both professional and lay. In addition a number of people in the ‘regulatory family’ will come to the end of their terms of office. Many new faces will be seen.

In closing may I record my thanks to Ann Wright and all those at Outer Temple, without their professional excellence and dedication we could not produce the results we do. Thanks also go to the CEO of the Legal Services Board – Chris Kenny – who moves on to pastures new.

Report from the Chief Executive

In 2014 the three original lay members from 2008 were due to retire. We said goodbye to Professor Danny Keenan in March 2014 (who went off to sort out the NHS – and if anyone can that would be Danny.) We welcomed Deborah Seddon in his place. The other two members stayed until March 2015 to ensure an orderly rotation. We thank Phil Portwood who led our Complaints Review Committee and worked with the Legal Ombudsman in their early days and Rosalind Burford who led IPReg’s involvement in the restructuring of the PEB. In November, Linda Harland (TRB member) and Sam Towlson (PRB member) both resigned. We were very sorry that they could no longer work with us. In March this year we welcomed lay members  Steve Gregory and Nick Whitaker.

We publish below the total ABS costs aginst a budget of c£150,000. These are external costs; for a period in 2013/4 our external consultant joined us as an employee although still working exclusively  on the ABS project. Our Counsel described securing an earlier s69 Order for another legal regulator (under s69 of the Legal Services Act 2007 (“LSA”) and one of the three necessary statutory instruments) as “the worst experience” of her professional career; we lived in hope but feared the worst. The Ministry of Justice is under resourced and was overwhelmed by simultaneous applications from IPReg and also from the Institute of Chartered Accountants for England and Wales and the Chartered Institute of Legal Executives. The delay in securing Licensing Authority status was over 6 months  and the increase in cost is apparent.

The difference between income and expenditure is £48,913 – this has been met by IPReg without any further levy.

IPReg was designated as a Licensing Authority for Alternative Business Structures (“ABS”) on 1 January 2015.

Prior to this, IPReg appointed its first Authorisations Officer in September 2014 to deal with those “ABS-like” firms who would be required to transition from registered to licensed bodies under the LSA.

In October 2014, IPReg began the process of identifying and approaching “ABS-like” firms who were required to either be licensed by IPReg as an ABS or remove the element of external management or ownership that made them licensable so that they could remain registered bodies. This process was undertaken in phases with the largest firms being contacted first. The process of contacting firms that were required to transition was completed in February 2015 and we are now in dialogue with all firms regulated by IPReg. We are currently focusing our efforts on firms who are ABS and who are already registered with us but now need to transition to being licensed; these are our priority.

We spent time developing the forms for licensed body applications, bearing in mind our principles-based approach to regulation at all times. It was important to us that forms be comprehensive but not disproportionate whilst also making sure that we discharged our obligations as a Licensing Authority under the LSA.

“The ABS application process is not as bad as some feared. IPReg has gone rather “lite” compared with SRA. Much of what it asks for is required and sensible for any firm, even if it is not ABS”. Keith Hodkinson, June 2015 issue of the ITMA Review, “The ABCs of ABS”.

We have received positive feedback from firms that the licensing application process has not been as burdensome as they might have feared and that it has actually provided them with a good opportunity to review their terms and policies and ensure they were up-to-date.  The majority of firms needing to transition have fully engaged with the process and the general standard of application we have received to date is high.

The transition period we are currently operating under is authorised by the LSB (which applies to all legal regulators) and, whist we do not have any date for the end of the transition period, we know that the LSB are beginning actively to consider it. We shall keep transitioning firms updated on any developments in this area.

For further information on the process of identifying and approaching “ABS-like” firms and the numbers and types of firms that are required to transition please see our Report to the LSB – Transitioning Firms as at 30 June 2015.

We look forward to assisting the remaining transitioning firms through the licensing process, as well as welcoming applications from firms who wish to take advantage of the greater degree of external ownership and management that is available to them under the LSA.

We have published  a comparison between our 2014 Budget and our actual spend on our Financials page but here is a pictorial guide to the split of costs. The red slice represents the levy to the LSB and the Legal Ombudsman. 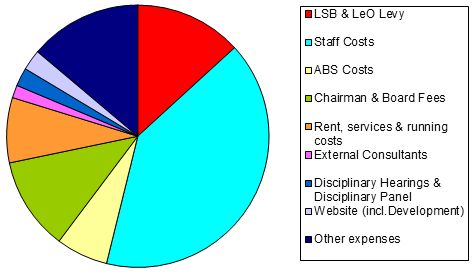 Admissions generally remain static for individuals although clearly entity regulation has grown since its introduction in 2010.

There were no disciplinary cases in 2014.

We have just received the following data from the Legal Ombudsman:

In 2014, the Legal Ombudsman accepted 3 complaints for investigation. 2 of these were resolved without investigation and in the 3rd  the complainant did not accept the decision of the Ombudsman.

IPReg’s financial year runs to end December but the collection of complaints statistics and the audit process prevent publication of the report until significantly into the following year. Consequently from 2014/5 the Annual Report will speak to activities as at the date of publication although the financial reporting will continue to follow the accounting year.